Just a Flute and a Guitar

Just a Flute and a Guitar

I quit playing for decades, my last big formal gig being a World Expo. The political requirements were way too steep to continue. I'm a wall flower in high-end social gatherings, preferring to carry on a discussion with the chair or the drapes rather than with that glittering person who just walked up to congratulate me and ask all sorts of personal questions. Classical music patrons and their 'need-to-know's make me squirm and look longingly for the exit.

Forrest struggled for years trying to find other rock musicians willing to commit themselves to excellence. Well, 'rock' musician is mostly synonymous with "in it for the sex, booze, drugs, and fame." Then, suddenly, sometime in the last few years, Forrest turned around and realized that he had a good, dedicated musician right there in the house — a captive session musician who had no escape, never mind that she was trained in classical concert flute and piano.

So he began arranging pieces for us, and, with effort, got me somewhat familiar with electronica. Somewhat. (I'm still struggling with foot switching and remembering that the flute acts like an antenna sometimes, especially with distortion patches.)

When all is said and done, we're not just some flute tooting along with a guitar. We really don't do boring, and that's all because of original custom arrangements and an audio vision of what the piece should sound like, all accomplished by our use of electronics, which can turn the guitar into anything from a harpsichord to a petulant child and the flute into a saxophone, screaming electric guitar, an organ, or a chorus.

Our goal is to make each piece uniquely listenable, even considering that we're just a flute and a guitar making the music happen.     — D. L. Keur (Dawn) 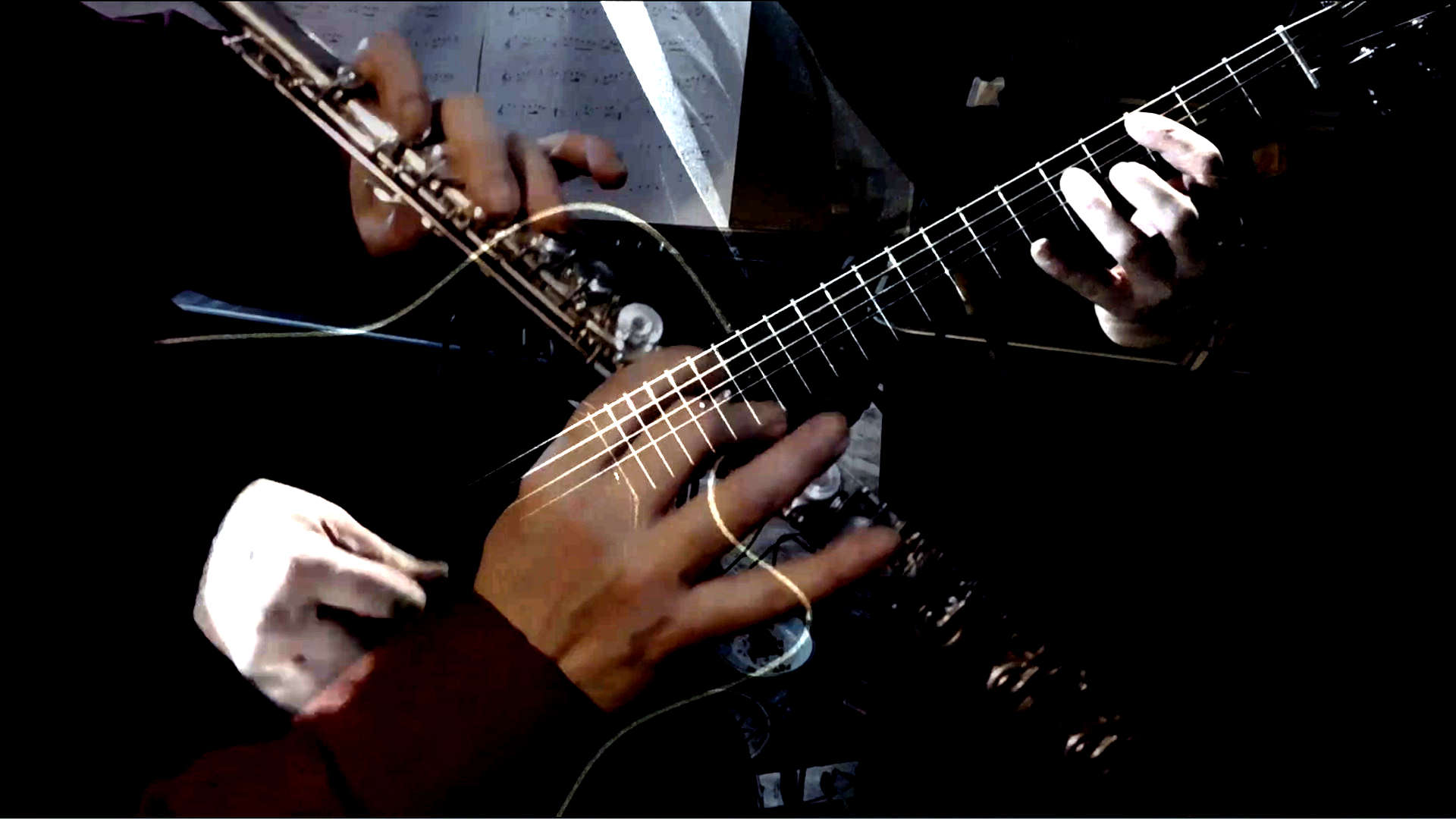 Goodbye Brick in the Wall

Arranged by Forrest W. Lineberry and performed by him and me, the dog is our good boy, Laddie, whom I have pictured elsewhere on this site.

The cats you catch a glimpse of here and there in our Kansas’ Carry On Wayward Son performance are one or the other of our furballs, specifically asthmatic Alecia at the end.)

My husband Forrest's arrangement of Black Hole Sun by Soundgarden's Chris Cornell for electrified flute and guitar, our tribute to Chris Cornell performed as a memorial for his untimely death.

Living in the Past

Again, my husband Forrest's arrangement for electrified flute and guitar. Says Forrest: “You can't have a flute in the band and not play some Jethro Tull. It just wouldn’t be right. Here's one of several in our repertoire — our arrangement of Living in the Past for electrified flute and acoustic guitar. I use my POG2 for the opening bass line. The rest is just straight guitar. Dawn uses flanger and echo on the flute for the opening theme. The rest is just a lot of breath and attitude to get that Ian Anderson tone.”

In Memory of Elizabeth Reed

Hold Your Head Up

Living in the Past

Goodbye Brick in the Wall

A heavy metal rocker from the start, Forrest teethed on KISS, Judas Priest, ACDC, and the like. He wanted to grow up to be a rock star, but, born into poverty in a remote logging village in North Idaho, the best he got was playing trumpet in the school band.  He learned to read music and blow whole notes — ‘footballs’ as he calls them.

Gifted his first guitar in his mid teens, Forrest found in it an instrument for which he had a natural affinity. Lesson one, and his first and only guitar teacher asked if he already played guitar …and didn’t believe him when he said ‘no’.  The only instructor in town, that man abruptly left with no warning after Forrest’s second lesson, and that was the end of any ‘formal’ guitar training.  Forrest turned to Guitar Player magazine and trial and error.

Inspired by the likes of Joe Satriani, Steve Vai, Frank Zappa, and Al Di Meola, he worked the fingerboard.  He read everything he could find, listened to records and tapes — yes, vinyl, 8-track, cassette, and CD — and worked things out with a drummer friend.  And got good — very good. Then, he turned to studying theory and, ultimately, to studying the old masters, analyzing the scores and notation, from Bach and Mozart to Mahler and Stravinsky.

Meticulous hands mark his technique, his fretting impeccable, his picking delicately accurate.  Then there’s his ear with nigh on perfect pitch. Couple it all with an uncanny grasp of music that bespeaks old mastery, and it’s like he was born already knowing the theory, the harmonies, the constructs that makes music ‘happen’.

Visit Forrest on his Guitar.FWLineberry.com website, or investigate his book, Scale Patterns for Guitar, 134 Melodic Sequences for Mastering the Guitar Fretboard. Part of his Playing Guitar series, it's available in print and eBook.

At age thirteen, she was playing first chair flute in the Chicago Youth Symphony Orchestra and also was picked to attend the Summer Music Institute at Western Illinois University.

Also at age thirteen, she was invited to train under scholarship in both piano and flute at the American Conservatory of Music in Chicago, IL, where she was privileged to private tutelage under the conservatory’s premier instructors in both flute and in piano.

Subsequently, studying for years under Richard Hahn, the top world-ranked flutist, second only to Rampal, she was invited to play in Europe. She was also selected to sit in on a two-week stint of improv- sessions with Carlos Santana and his group.

Dawn’s played with symphonies large and small in New York and elsewhere, as well as playing in chamber groups that featured the first chair string, woodwind, and horn players from the Bangor Symphony Orchestra, the Philadelphia Philharmonic, and other notable symphonies. She was soloist at two Bach Festivals with top harpsichordists, played with a much-revered concert pianist, and was invited to play at a World Expo. She also performed with several summer groups that toured, including both woodwind and woodwind/horn ensembles, quartets, quintets, and chamber orchestras.

Throughout, Dawn taught select students, passing on the extraordinary Richard Hahn’s techniques and knowledge, but she stopped playing professionally, and, in fact, stopped playing for several decades.

Now, Dawn only performs classically on very select occasions, but does regularly perform with her husband, Forrest, playing amplified, digitally-enhanced, electrified flute, often in styles that challenge her traditionally-trained boundaries.

Dawn plays a Gemeinhardt, a Yamaha, an Azumi flute with an Altus headstock, and, since July 1, 2017, a return to Haynes, historically her favored instrument.

She uses an AKG C555L headset microphone, usually plugged in with a MPAVL Micro Mic Phantom Adapter for 9-52 Volt, also from AKG, rather than with the wireless transceiver, unless they’re playing out somewhere.

Her floor units for effects was her choice of the Digitech RP1000, which Forrest then decided to use, too, and she went with Forrest’s find of the POG2.

Dawn also owns an upright grand and a spinet along with a Yamaha digital grand.

If you want to know more about Dawn, you can visit her on DLKeur.com. If you want to learn about flute playing from a professional's perspective, get her book, Dawn's Flute Notes, Practical Advice for Flute Players from Practice Room to Stage.